The Vineyard Haven Public Library is forming a Great Decisions Discussion Group that will meet for 8 weeks on Thursdays at 7pm, beginning February 10th.

The briefing book includes an opinion ballet to be filled in by each participant and sent to the FPA, who tabulates opinions and sends a National Opinion Ballot Report to the White House, the departments of State and Defense, members of Congress, the media, those participating in the balloting process, and concerned citizens.

Rebuilding Haiti
Thursday, February 10th, 7:00 pm DVD 7:30 Discussion
The January 2010 earthquake that devastated Haiti struck a country already suffering from widespread poverty and underdevelopment. Did this natural disaster inadvertently provide an opportunity for reassessment and planning a new Haiti? Will the results of the 2010 presidential elections provide the leadership bring to restore the country?

U.S. National Security
Thursday, February 17th, 7:00pm DVD 7:30 Discussion
U.S. national security priorities were expanded after the terrorist attacks of September 11, 2001, to include waging war in Iraq and Afghanistan, tightening border security, pursuing cyberthreats, halting nuclear proliferation and attempting to snuff out homegrown terrorism. How has the U.S. national security agenda evolved since 9/11? In what ways will this agenda shape the American way of life in the future?

Horn of Africa
Thursday, February 24th, 7:00 pm DVD, 7:30pm Discussion
Since the early 1990s, the U.S. has monitored the Horn of Africa due to security concerns. Internal instability, weak governments in some countries, regional rivalries and a lack of development have resulted in an environment conducive to terrorism. Can the U.S. protect its national interests while mitigating the dangerous conditions in the region?

Responding to the Financial Crisis
Thursday, March 3rd, 7:00 pm DVD, 7:30pm Discussion
As an immediate response to the financial crisis of 2007–08, governments around the world stepped in to bail out troubled private banks deemed “too big to fail,” underscoring the interdependence between private and public finances. With the recent eurozone crisis, what have we learned so far and is it possible to ensure that future crises will not occur?

Germany Ascendant
Thursday, March 10th, 7:00 pm DVD, 7:30pm Discussion
Germany has emerged from both the financial crisis and the eurozone crisis as the dominant economic and political power in Europe, in particular setting the tone for dealings with Russia, Eastern Europe and Iran. How important is it for U.S, interests to enhance relations with Germany, and how should the U.S. react when German and U.S. interests fail to align?

Sanctions and Nonproliferation
Thursday, March 17th, 7:00 pm DVD, 7:30pm Discussion
Sanctions have been created to curb nations in violation of international law, especially agreements concerning nuclear nonproliferation. How successfully have sanctions been applied against past violators? Is there any chance sanctions can curtail North Korea and Iran from continuing to develop nuclear weapons?

The Caucasus
Thursday, March 24th, 7:00 pm DVD, 7:30pm Discussion
The countries and regions of the Caucasus all have strong national identities but have long lived in the shadow of their larger neighbors: Russia, Iran and Turkey. How does this influence the Caucasus of today? How do the region's energy resources play into its relations with the outside world?

Global Governance
Thursday, March 31st, 7:00 pm DVD, 7:30pm Discussion
International cooperation subjects political leaders to an ongoing test: balancing national needs with a commitment to building a durable international order. How has an increasingly interconnected and shrinking world affected the viability of existing agreements and institutions? What economic, social, political and security concerns are currently on the agendas of intergovernmental bodies, and what is the future U.S. role?
Posted by VHLibrary at 5:29 PM No comments:

The Friends of the Library hold "mini" book sales at the library, from 1pm-3pm on the third Saturday of each month. The February sale will be held on Saturday, February 19th.

Proceeds from these sales benefit library programs for children, and other library services supported by the Friends. Sales are also planned for Saturday, March 19th, and Saturday, April 16th, from 1pm-3pm.
Posted by VHLibrary at 9:29 AM No comments:

The library will be presenting a series of films about newspapers and journalists. Films will be shown Sunday afternoons at 2pm: 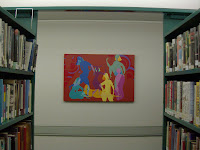 The Friends of the Library are pleased to present an exhibit of acrylic paintings by Vineyard Haven artist Patricia Carlet. The exhibit will be on display on the lower level during regular library hours from January 19th through March 5th.

"My art is created to evoke smiles and encourage laughter. If it captures the pleasure and irony of the everday for the viewer, then I feel that I have succeeded as an artist."

"Art in the Stacks" is a new initiative of the Friends of the Library, to provide individual artists an opportunity to show their work, and for library patrons to enjoy art at the library throughout the year. The Friends also host an annual group art show in June.
Posted by VHLibrary at 12:28 PM No comments:

Many Federal and State tax forms, including the 1040, 1040EZ, 1040A, and associated schedules, are available at the library. If there’s a form we don’t have, the library can make a copy of the form at no charge (instruction books excluded).

This year, anyone, regardless of income, can e-file their extensions at no cost from a home computer using IRS traditional FreeFile or FreeFile Fillable Forms. For more information, visit IRS.gov.
Posted by VHLibrary at 11:24 PM No comments:

The Vineyard Haven Public Library will be offering a "Food For Fines" fine amnesty program from January 15th through January 31st. Bring in a nonperishable food donation for the Island Food Pantry along with your overdue items, and fines will be forgiven on the returned items.
Posted by VHLibrary at 11:55 AM No comments:

On Tuesday, January 4th at 7pm, Jim Norton and guests including Demaris Wehr will lead a discussion group/workshop about Jelaluddin “Rumi”, the thirteenth century Muslim poet, jurist, theologian and Sufi mystic. The series will include three class discussions on consecutive Tuesdays at 7 pm, studying Rumi, the best-selling poet in America.

On Sunday, January 9th at 2pm, Chris Morse, owner of the Granary Gallery at the Red Barn, will talk about noted “Life” photographer Alfred Eisenstaedt, one of the foremost photo-journalists of the 20th century. Some of Eisenstaedt’s iconic images will be on display. Light refreshments will be served following the talk. This event is sponsored by the Friends of the Vineyard Haven Public Library, as part of the "Sunday with Friends" series.

Special children's programs will be offered later in the month. Join us for Music with Susie Bowman on Tuesday, January 18th, at 10am for ages 0-2 and at 11am for ages 3-5. On Thursday, January 20th, children ages 5 and up will enjoy Yoga with Jill, at 3:30pm. Kids age 8-11 will enjoy a movie at 3pm on Wednesday January 26th.

The Friends of the Library will host their next "mini" book sale from 1pm-3pm on Saturday, January 15th. Sales occur monthly on the third Saturday of the month, and proceeds support children's programs at the library.

For a full schedule of events, visit the library's online event calendar.

Posted by VHLibrary at 9:40 AM No comments: