In January 1967, students in the Tisbury School sixth grade class taught by Dorothy R. Howell placed a time capsule in the wall of the Vineyard Haven Public Library, with the intention of opening the capsule 50 years later, in 2017. Now, former students and the public are invited to witness the Time Capsule Opening Ceremony and share refreshments and memories, beginning at 4pm on Saturday, April 29th.

The capsule was first placed at the library in 1967, when the building was under construction. When the library was renovated and expanded in 1998, the time capsule was uncovered under the supervision of Mrs. Howell and student H. Lester Baptiste, but was left unopened and secured inside a wall in the new building. Earlier this month, the Tisbury Department of Public Works put a camera inside the wall to locate the time capsule, which appears to be still intact. An access panel was put in place to protect the capsule until the opening ceremony.

Items found in the Time Capsule will be documented, and will be on display at the library during the month of May, 2017, and on the Time Capsule Facebook page: https://www.facebook.com/TisburyTimeCapsule/
Posted by VHLibrary at 9:32 AM No comments:

Vineyard Haven Library will be open from 9am to noon today. Afternoon programs have been cancelled.
Posted by VHLibrary at 8:48 AM No comments:

Try Encore, a New Way to Search the CLAMS Catalog

Based on feedback from library patrons, CLAMS now offers an enhanced online catalog called Encore. Encore is an intuitive yet powerful search option that includes features common to search engines such as Google. It is a new way to search for books, DVDs, digital titles, etc. in the CLAMS libraries.  Encore is particularly powerful when you begin with a broad search and want to narrow it down.

Encore integrates the patron’s OverDrive eBook checkouts and holds into “My Account” and allows access to full-text articles from Gale General OneFile, an online reference resource provided through the state. For more details, please visit the CLAMS Encore Help Page.

(If you prefer to search the former catalog, just click the link to "Classic Catalog" that you will find on the Encore website.)

Posted by VHLibrary at 2:46 PM No comments:

Please register online or at the library. The briefing book may be purchased for $25 from the FPA website at www.fpa.org, or by calling (800) 477-5836. A limited number of copies will be available to read in the library.

Thursday, April 6th
The Future of Europe: Coping with Crisis
The outcome of the United Kingdom referendum on EU membership sent shockwaves across the globe. It even caught British voters by surprise. The European Union has helped secure peace in Europe for the past 70 years. Now it faces an uncertain future. Amid a refugee crisis, lingering financial recession and the constant specter of terrorism, unity seems more imperative than ever. But the Brexit vote underscores the complexities of integrating an extremely diverse continent. What will post-Brexit Europe look like, and how can U.S. foreign policy adapt?

Thursday, April 13th
Trade, Jobs and Politics
The U.S. political mood toward trade has gone sour. One need look no further than the 2016 presidential contest for the popular narrative: trade means that China wins, at America’s expense. But do the numbers support that conclusion? The metrics used to gauge economic strength—Gross Domestic Product and balance of trade—have not kept up with the realities of modern manufacturing. Obtaining an accurate picture of U.S. economic stature requires a critique of those numbers. Only then can the U.S. develop appropriate policy solutions for the challenges at hand.

Thursday, April 20th
Conflict in the South China Sea
The South China Sea is a locus of competing territorial claims, and China its most vocal claimant. Beijing’s interest has intensified disputes with other countries in the region in recent years, especially since China has increased its naval presence. Despite rising international pressure, including an unfavorable ruling by the International Tribunal for the Law of the Sea, China staunchly defends its policies in the region. Preventing tensions from boiling over is a matter of careful diplomacy.

Thursday, April 27th
Saudi Arabia in Transition
As Saudi Arabia struggles to adjust to the drastic decline in oil revenue, Deputy Crown Prince Mohammad bin Salman attempts to boldly transform the country and shift more power to the younger generation. At the same time, many countries such as the U.S. point out the lack of democracy, women’s rights and human rights in Saudi Arabia, and blame its promotion of Wahhabism, an extremely conservative version of Islam, for creating jihadists. Bipartisan criticism of Saudi Arabia is rising in Congress. Both countries need each other, but they are at a crossroads in bilateral relations.

Thursday, May 4th
U.S. Foreign Policy and Petroleum
What is the effect of U.S. petroleum security on foreign policy? For 45 years, the country has alternated between periods of energy security and insecurity, sometimes able to wield petroleum as a useful instrument of foreign policy, sometimes not. Despite the so-called “energy revolution,” the U.S. today is by no means disentangled from foreign dependence and global trends. In order to be successful, policymakers must recognize both petroleum security circumstances and patterns in the relationship between petroleum and foreign policy.

Thursday, May 11th
Latin America's Political Pendulum
The pendulum of Latin American politics is swinging rightward once again. Yet as the “pink tide” recedes, the forces of change have more to do with socioeconomics than ideology. Dramatic economic and political crises have coincided in countries like Brazil and Venezuela. Still, the final result for Latin America may be the emergence of centrist, pragmatic modes of governance, and with them, opportunities for the U.S. to improve relations. The new administration must look beyond the neoliberal model of the 1990s, and develop an approach to relations fit for the 21st century.

Thursday, May 18th
Prospects for Afghanistan and Pakistan
Major internal conflict has plagued Afghanistan for four decades. The U.S., for its part, has conducted military operations in the country nearly continuously since 9/11. Today, war with the Taliban persists, and tensions between the U.S. and Pakistan have gradually deteriorated. As his time in office drew to a close, President Obama limited further withdrawal of U.S. troops from Afghanistan. The incoming administration has a choice: will it maintain the status quo, completely reverse the Obama administration drawdown or withdraw completely? Does the U.S. face a no win situation in Afghanistan and Pakistan?

Thursday, May 25th
Nuclear Security: The Enduring Challenge of Nuclear Weapons
Nuclear nonproliferation was a top priority for the Obama administration. While the Iran Deal was a diplomatic victory toward this end, major threats persist from both state and non-state actors. Countries like North Korea, Russia, and India and Pakistan continue to challenge nonproliferation efforts. The possibility that terrorists will carry out an attack using a “dirty bomb,” made from captured nuclear materials, looks increasingly real. In a fractious world, which way forward for U.S. nuclear security policy?
Posted by VHLibrary at 3:32 PM No comments:

Art in the Stacks: Lynn Hoeft 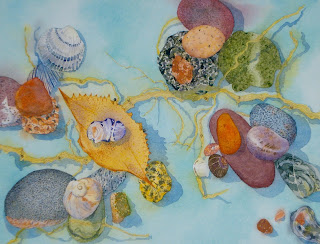 The Friends of the Vineyard Haven Library are pleased to present an exhibit of watercolor paintings by Lynn Hoeft. The exhibit will be on display on the lower level of the library, during regular library hours throughout the month of March, 2017.

A lifelong painter, Lynn has been on the Vineyard since 1971, with brief
stints away in California, New York and Vermont. Most often painting from a bird's eye view, her watercolors and colored pencil drawings often include shells and stones from the beach, along with leaves, seeds and berries.  Whether she's walking around town, through the woods or at the beach, the artist is always on the lookout for moss, shells and feathers to add to her next painting. Lynn teaches watercolor and calligraphy classes at Featherstone Center for the Arts in Oak Bluffs.

The Vineyard Haven Public Library's "Art in the Stacks" space features rotating monthly exhibits and is managed by the Friends of the Library. The library also has a permanent collection of artworks that are displayed throughout the year, including 12 paintings by Vineyard artist Captain John Ivory. Artists interested in showing their work may contact the library at (508) 696-4210.
Posted by VHLibrary at 2:00 PM No comments: