The library will be closed for Columbus Day on Monday October 9th, and for Veterans Day on Saturday November 11th. Due to a staff training event, the library will open late at 11am on Saturday, October 28th, and eBook classes will be cancelled that morning.

Art in the Stacks: Margaret Emerson 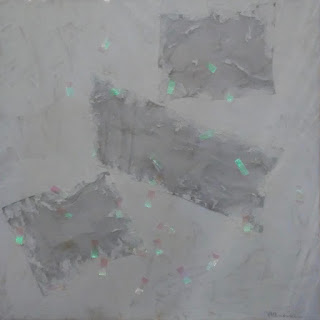 The Friends of the Vineyard Haven Library are pleased to present an exhibit of abstract paintings by Margaret Emerson, on display on the lower level of the library during regular library hours throughout the month of September, 2017.

Margaret Emerson is a retired nurse educator who began her new career as a painter when she moved to Martha’s Vineyard in 2009. Margaret is a member of the Martha’s Vineyard Art Association and shows her work at the Old Sculpin Gallery in Edgartown as well as the Island Gallery in Vineyard Haven. Her latest paintings are abstract works, many reflecting nature.

Margaret Emerson’s show at the Vineyard Haven Library features abstract paintings completed in
2016 and 2017. A highlight of this show is the painting hanging in the stairwell, “Hillary’s Glass Ceiling, Ready, but Never Dropped at the Javitz Center - Election Night, 2016,” which incorporates pieces of the actual “glass ceiling” planned for the Hillary Clinton election party. Margaret was given these pieces by a friend who worked on Hillary’s campaign and helped with the clean up of the party that never happened.

The Vineyard Haven Public Library's "Art in the Stacks" space features rotating monthly exhibits and is managed by the Friends of the Library. The library also has a permanent collection of artworks that are displayed throughout the year, including 12 paintings by Vineyard artist Captain John Ivory. Artists interested in showing their work may contact the library at (508) 696-4210.
Posted by VHLibrary at 4:03 PM No comments: