On Tuesday, October 29th at 7pm, the Vineyard Haven Public Library will present a special screening of the documentary film 'The Cat Rescuers', followed by a Q&A session with the film's producer-director, Steven Lawrence. Representatives of Second Chance Animal Rescue will also be present to answer questions on trap, neuter and release programs here on Martha's Vineyard. This event is free and open to the public.

With over 500,000 street cats struggling to survive in New York City, and the city unwilling to address the problem, spirited volunteers have come to their aid. The beat is Brooklyn, where the problem has exploded. Combing the borough's alleys, backyards, and housing projects, they trap the cats, get them fixed and returned to their colonies or adopted. A dedicated group of people in Brooklyn devote their days and nights to rescuing abandoned or otherwise homeless kittens and cats.

Of course, the animals are adorable, but these people are equally inspiring. Their love and commitment to actually making a difference to the lives of these animals and to affecting social change concerning the environment, local laws and public policy is remarkable. The Cat Rescuers shows the skill, resilience, and humor these volunteer activists display in the face of such challenging work, and how their mission to reduce animal suffering -- often at great sacrifice to themselves -- makes a difference for the animals and the community, while changing the rescuers' lives.

Steven Lawrence is a producer-director whose documentaries have appeared on PBS, MTV and A&E. He has produced three films for director Michael Apted including Married in America, an ongoing doc about 9 marriages. His other productions, which have often focused on the arts and human rights, include The Furious Force of Rhymes, a global look at hip-hop as protest music, and Sarabah, about Senegalese rapper Sister Fa’s campaign to end female genital cutting. Currently, Steven is finishing Missing Microbes, a feature doc about the importance of the human microbiome, co-directed with Sarah Schenck. His work has received an IDA Documentary Achievement award, 3 Cine Golden Eagles, the Special Jury Award from the Locarno Film Festival and the Golden Butterfly from Movies That Matter.

Trailer for 'The Cat Rescuers'
https://www.youtube.com/watch?v=mdxKnsFpaJ0
Posted by VHLibrary at 11:07 AM No comments:

Art in the Stacks: Annette Sandrock 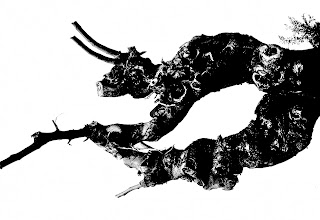 The Friends of the Vineyard Haven Library are pleased to present an exhibit of photographs by Annette Sandrock, on display on the lower level of the library during regular library hours throughout the month of October. This exhibit of black and white images of treetops in Crete is dedicated to the lost trees of Amazonia, and to the the majesty of trees as they grace our lives.

The photographs on display are also found in "Labyrinth," a book of poetry by Annette I. Sandrock that was published in Portugal this earlier this year. On Thursday, October 17th at 7pm, Annette will give a reading from her newly released book of poetry at the library. Copies of the book will be available for purchase and signing, and refreshments will be served.

Annette Sandrock has been a resident of Vineyard Haven more than 30 years and raised a family of three children here. Her careers as newspaper writer and arts critic, copy writer for television advertising, and English teacher at Martha's Vineyard High School, have all revolved around the spoken and written word. Annette Sandrock is a member of Cleaveland House Poets, and her poetry has appeared in The Martha’s Vineyard Times and the Vineyard Gazette, and in the books Cleaveland House Poetry(2015), Legacy of Light: Poems for the Gay Head Lighthouse (2014), and Martha's Vineyard Poets' Collective New Work (2013). She is a passionate traveler who spends most of her time abroad in Lisbon, Portugal.

The Vineyard Haven Public Library's "Art in the Stacks" space features rotating monthly exhibits and is managed by the Friends of the Library. The library also has a permanent collection of artworks that are displayed throughout the year, including 12 paintings by Vineyard artist Captain John Ivory. Artists interested in showing their work may contact the library at (508) 696-4210.
Posted by VHLibrary at 12:22 PM No comments: